Tommy’s launched their social media campaign, #misCOURAGE on Monday 16th November, to encourage people to share their experiences of baby loss and miscarriage and to break the taboo around it. Please do follow on to their page for more information by clicking the link at the start of this sentence. I found it a really good read and it is so fantastic to hear that in April 2016 Tommy’s will be opening a miscarriage research centre, which will potentially bring some answers to so many couples. The centre will focus on early miscarriage and it’s causes. At the moment, you would have to suffer 3 consecutive miscarriages before you would be referred to a recurrent miscarriage specialist for investigations, Tommy’s wants this reduced immediately to 2 and eventually have every miscarriage fully investigated and taken seriously.

I have 2 little boys and have had 3 very different miscarriage experiences. In 2012, I had an early miscarriage and a lack of understanding and experience allowed me to give it the brush off and get on with it. Immediately falling pregnant again and having a healthy pregnancy allowed me to focus on my baby and be strong. Our second son was born in 2013.

We carefully planned when to try for our next child and in summer 2014 we were delighted to find that we were pregnant. After a successful previous pregnancy I was excited and couldn’t wait to start making plans, which of course is a normal reaction to a positive pregnancy test. The test line wasn’t as dark as the control line but I didn’t care, a positive is a positive right? I never understood why women took more tests after getting a positive, now I know that it is an easy way to check yourself that your hCG levels are going up as they should. If I knew this at the time then I maybe could have had a warning of what was to come next. In late September, one Saturday morning I woke up at 6am and went to the toilet, I was bleeding, heavily, I sobbed and sobbed as we headed up to the hospital to get checked out. Of course I knew that my baby had died but you cling on to any shred of hope that you can. Urine pregnancy test, negative. ‘Are you sure you are pregnant?’ One of the nurses asks insensitively, before taking a blood sample to ‘double check’. I am sent back to the busy waiting room, and I wait, for what felt like a day but was probably about an hour, eventually I am called to a curtained bay where a doctor says to me, ‘Natalie I am afraid you have suffered a miscarriage’. My hCG level was 8, so the miscarriage was underway well before I started bleeding. I reattended the hospital 3 days later for more bloods to ensure my hCG level continued to drop.

The following video I took from Tommy’s website, it shows some of the insensitive and unhelpful things that people say to you after you have suffered a miscarriage.

Though devastated for the loss of our baby, the doctor we saw at the follow up appointment took a long time explaining to us that early miscarriages are often the result of chromosomal abnormalities and a lot of the time the ‘pregnancy’ would not have been viable. She told us that 1 in 4 pregnancies end in miscarriage, which I didn’t know at the time. She told us that many women go on to have a successful pregnancy next time and that if we chose to try again there was no reason for us to wait if we didn’t want to.
In January this year we got another positive pregnancy test, and were both delighted and terrified. We attended an early reassurance scan at 6w2d and expecting to see a heartbeat as we did with our early reassurance scan with our little monkey at 5w3d. No heartbeat, they couldn’t confirm a miscarriage and asked us to return in 1 week to be rescanned. They ordered 48hr hCG blood tests to check that my levels doubled and they did! Our baby was growing as it should, and sure enough when we were rescanned, we saw a heartbeat. 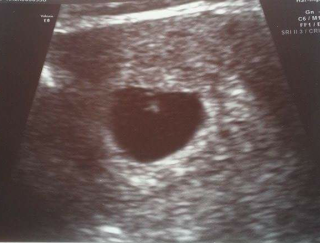 All seemed to be going well, until the 29th April, we were due to go on holiday and when I visited the midwife I asked if I could listen to the baby’s heartbeat, I was 18w1d so was hopeful I would hear it. She tried to find it and could only get the placental blood flow, she wasn’t worried and advised that I could go back in the afternoon after a sugary, cold drink if I wanted to. I went back in the afternoon and it was the same. She put me at ease and didn’t seem worried at all, but said she could arrange for me to attend the labour ward for an assessment if I was worried. After a discussion with my husband, we decided it was better to be safe as we were going on holiday abroad. We went along to the hospital and no heartbeat could be heard on the doppler there either, an ultrasound machine was brought in and a young (inexperienced) registrar started to scan me. Now, the thing is, the scan machine had red and blue areas that show active blood flow, on the screen was lots of blue and red, and then a grey baby in the middle. No movement. No colour. Anyone with eyes could see what he failed to say in good time. He scanned and scanned for what felt like forever, then said, I am sorry but there isn’t a heartbeat.
Our baby had died.
I cannot explain to you the waves of emotion and pain that came at that point, a few minutes before, my husband and I had been discussing whether it would be cheeky to find out whether it was a boy or a girl. And now, we had to arrange to come back into hospital and have our baby, and we would not be able to take him home.
A ‘missed miscarriage’ the doctor said, your body has continued to support the pregnancy after the baby has died.
Our baby boy was born 3 days later, he was perfectly formed and tiny. We held him, wrapped him up in a blanket and spent some time with him and we went home, no longer pregnant, and without our baby boy. You cannot ever imagine going through labour when your baby has already died, but you do. A strength comes from an unknown place and you power through it.
Since losing Jack, I have had very little support from the hospital, no bereavement services offered and to be perfectly honest, only a couple of people have continued to support us. Initially, we had many messages of condolence and people telling us they are sorry for our loss, but that doesn’t last. The truth is, people are unsure of what to say so they say and do nothing, which is worse.
After both of my recent losses, I was left wondering what I had done wrong, had I not taken my multivitamins for long enough? Could my diet have been better? Miscarriage has left me feeling guilty, traumatised and lonely. Lonely in my grief, and lonely in that nobody wants to talk about it. Luckily for me, I found my safe place on a Mumsnet forum, made up of ladies that had all suffered recurrent miscarriage. It was from these ladies that I got a real understanding of the reasons behind miscarriage and all of the support and interventions that are available. These women literally pulled me through my darkest days and showed me that actually there will be a day when this is all much easier to deal with. My husband is great, but he was grieving too, I felt needy wanting him to look after me.
Miscarriage brings trauma and loss, and when you are in the depths of your grief you will struggle to see the path that will get you through it all, but you will learn to manage your pain and feelings. It does get easier, and obviously you never, ever get over it but you learn to live with it, and the pain becomes bearable. You are stronger than you think.
xox
Excellent support and information can be found on the following websites;