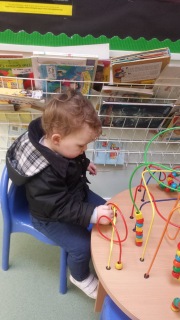 Today I got a call from my little monkey’s consultant paediatrician, on a Sunday, she truly is an amazing doctor dedicated to her job and to the children that she works with. She called and told me that she had written Noah’s assessment report, and that it confirms what we all already knew.

I expected to feel so happy and relieved when we finally got the diagnosis for him, after all we were positive that he was on the autism spectrum and have been leaning towards that diagnosis for such a long time.

I didn’t feel as I thought I would, I felt the relief yes, and I am pleased that he will now be able to access so much more support.

It is hard to describe how it feels to be told that your child has a condition that will affect them for the rest of their lives. It is like being hit by a train, a train that you saw coming but never moved out of the way. You anticipated the train’s arrival and almost looked forward to it, but when it came, it hurt. It hurts for me, because when things aren’t looking great it is human instinct to cling to your best case scenario, and that best case scenario was that there was a reason that Noah’s development was behind and that he was just late in developing language. But also I hurt for him, he now has a label attached to him, granted it is a label that will attract support for him, but he is different. I hurt for him because he may never learn to talk, people will stare at him when he has a meltdown in public and he will struggle to make friends. Social situations will be scary, and there already are so many things that he cannot enjoy.

Today is such a huge day for us, and I don’t know if anyone who has not been in this situation would understand the rollercoaster of emotions that obtaining a diagnosis brings. We have been incredibly lucky to get a diagnosis in less than a year, and before he is 2 and a half, I know of other families that have waited years or are still waiting. Waiting for an appointment, a decision, or to be taken seriously. It truly is a fight to get your child the support they need and deserve.

To us, Noah is exactly as he should be, he is our little monkey, he is his ‘normal’. Sadly, we regularly have to deal with people that don’t understand him, or understand why we can’t take him certain places but I think realistically we will always have to face that. He may not talk, or understand, or be interested in the things that you are but we as parents could not be prouder of him, he is such a funny character, he loves to entertain others and to be entertained himself, he loves to laugh but equally he loves to spend lots of time on his own, playing with his toy cars, driving them past his face and watching the wheels. 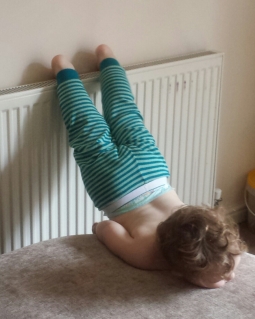 I strive to be honest on this blog, so I need to tell you that I haven’t always been able to talk about Noah’s development in this way. There have been days (and nights) where I have cried. Cried for him, cried for myself, cried because I don’t know if I can be the best Mum for him, cried because he can’t say Mum and cried because he may never talk at all. I am starting to realise though that Noah doesn’t need an expert in child development, he doesn’t need someone who knows all of the makaton signs, he just needs a supportive Mum, Dad and brother who love him lots and that is exactly what he has.

I still worry about his future, and probably always will and there are times when it does keep me up at night but I love all of the things that make him different, I mean, who really sits on the sofa like he is above. Chest on the seat and toes tucked behind the radiator?

6 thoughts on “My monkey’s diagnosis”